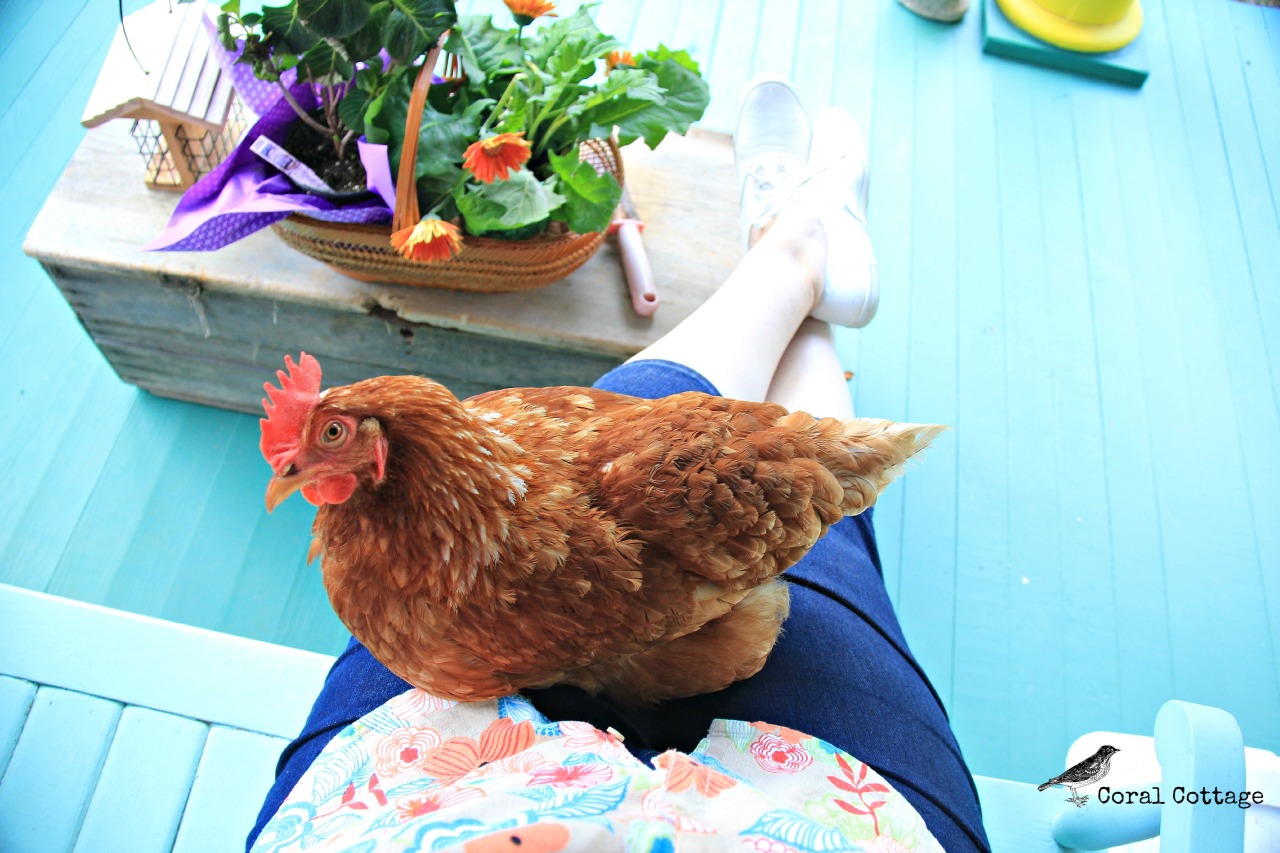 Lucy likes to sleep on my lap in the mornings.

Oh my is it really June, already.  Where has the time gone?  Come sit a spell and catch up a little, won’t you.

Last time we visited I was heading to surgery for my shoulder, and Mr. Cottage for Lithotripsy.  He has since had a second lithotripsy and is still unable to pass that massive boulder.

My shoulder surgery repair wasn’t as extensive as initially thought – thank heavens!  Nonetheless, it is a slow frustrating recovery process.  I’m in physical therapy a couple of times a week, and will be for quite some time.  I have an extensive therapy program to follow at home and most days I am very good at sticking to it. UGH!

Boo, Peanut and Stanleyroo out for a morning walk

The cats, Wynnie, Henry, TC and Mr. Bonez are all well and enjoying that warmer weather has come.

In chicken land, Lucy and Ethyl (the mean girls) continue to amaze and entertain us with their antics and bigger than life personalities.  They also continue to rule the roost in-spite of the fact that Stanleyroo is growing by leaps and bounds and has finally learned how to crow.  He is the handsomest rooster ever – and I think he knows it. 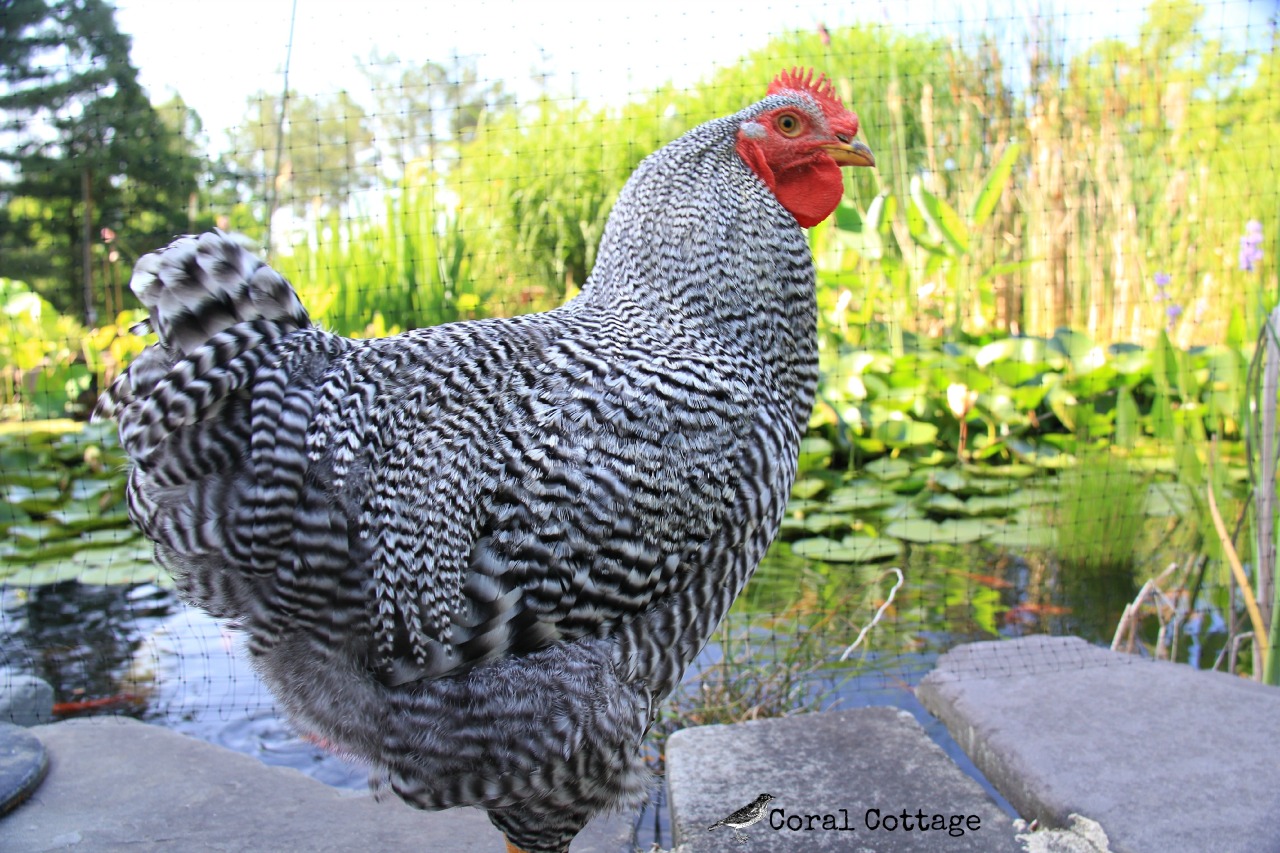 Bert has the most amazing feathers including iridescent green. 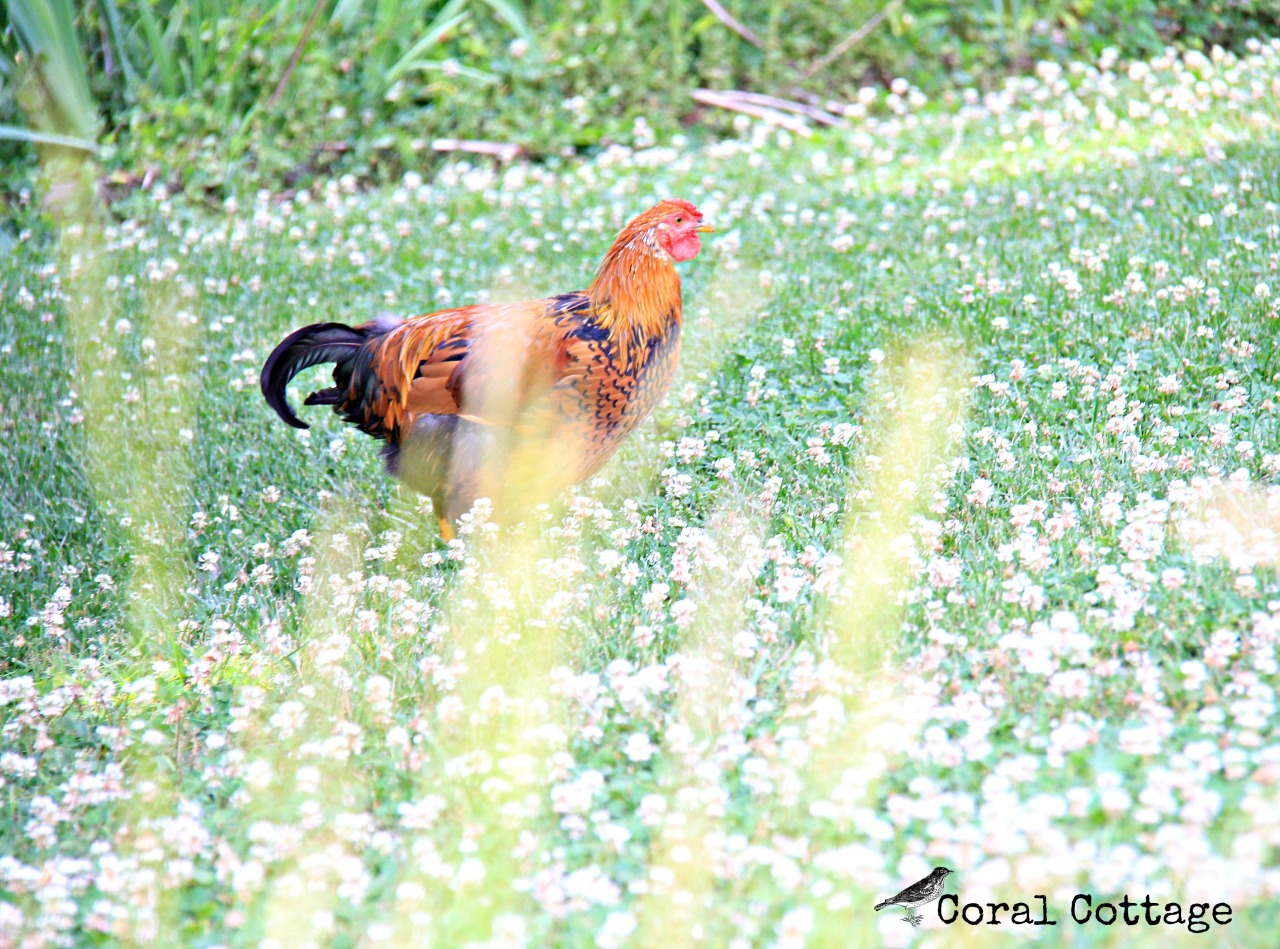 Bert enjoys a meal of clover

It is my hope that Alice, Elsie and Mamie the young Barred Rocks, will soon be laying eggs.  They are all healthy and hard to tell who is who, because they look so much alike.

Cottage chicks out for a stroll

The Cottage men recently worked on rebuilding the inside of the coop making more nesting boxes and perches. The girls refuse to sleep on the perches and go straight to the nesting boxes and since the mean girls won’t share, space is important.

Lucy and Ethyl were supervising while the men worked in the cramped space – In other words, they were under foot the entire time.

Father Cottage works on installing nesting boxes in the coop

Lucy keeps a close watch over the coop renovation

An acquaintance contacted us recently asking if we would take in her four goldfish that had outgrown their fish tank.  We agreed and they are right at home with all the other zillion goldfish and koi.

Boo and Peanut barking at the fish

Mornings at the pond aren’t as peaceful as they used to be.  Peanut becomes quite animated  and runs back and forth like a lunatic barking and trying to catch the fish.  Often, her enthusiasm gets the better of her and SPLASH! she ends up in the pond.  Boo cheers her on with tail wagging and loud barking.

Peanut jumps into the pond while Boo cheers her on

Speaking of Peanut and Boo, they have come a long way since we adopted them in April.  They have oh so many issues;  however they are happy and I think that they are  thankful to be with us.   Every day we struggle to understand what kind of cruelties must have been inflicted upon them by their previous owner.  We believe lots of love and time will continue to heal their souls.

Small victories in the garden.

Gardening has been off the table for me because of my shoulder.  SO I am humbled and appreciative of the small things that we have been able to accomplish so far this season.  I’m itching to get out there and do more!

Raise your hand with happy.  This week my surgeon gave the okay for me to slowly increase the amount of weight I may carry.  Hooray!  Previously I was restricted to lifting the equivalent of a cup of coffee.  I’m still not allowed to move my arm away from my body with weight. Mr. Cottage says I look like a penguin when I try to do things with my left arm.

They say it’s like riding a bike.  You never forget how to do it and it will come right back to you.  First thing I did this week once the ban was lifted, was blow the dust off my big girl camera.  It has been a very long time since I have been able to use that camera  and to shoot in manual  – even longer.  I have to re-teach myself to think about all the settings, until it comes back to me I feel like I am riding the proverbial bike for the first time.  I’m spending a lot of time on my butt and belly since I can’t hold the camera up to take photos, but I’m okay with that, I just hope nobody sees me when I try to get up – it isn’t the most graceful thing.

Anyway, that is pretty much what life has been like here at the Cottage.  Please do share what is new with you. 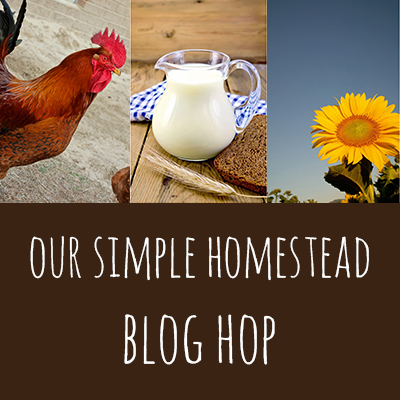