A few years ago, our friend Donna, passed away after a battle with cancer. 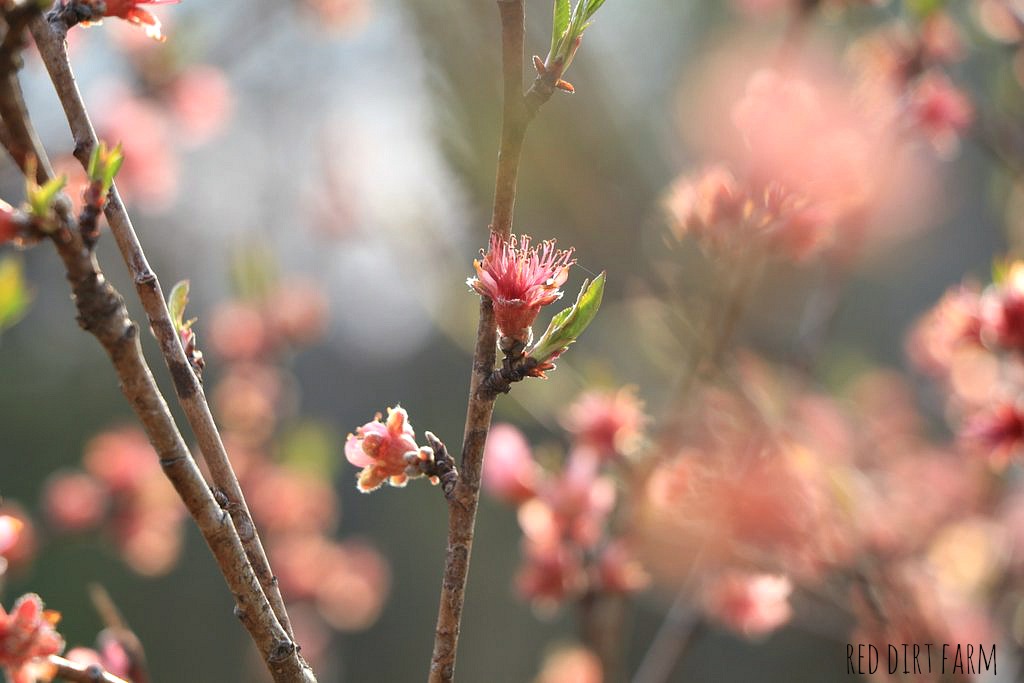 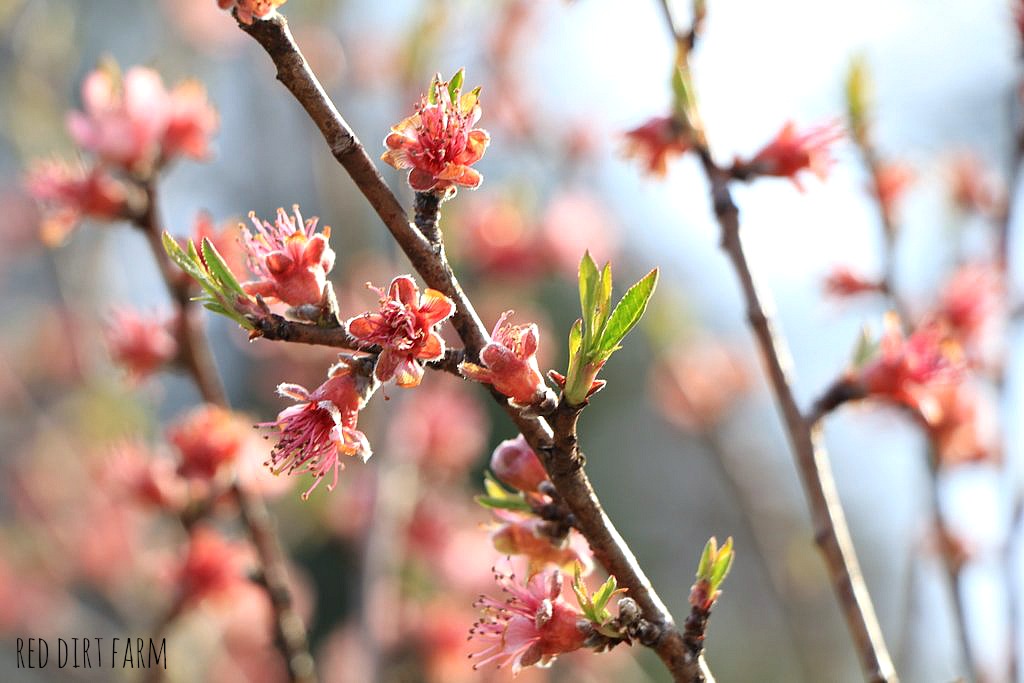 Here is a story about a little crooked tree.

Donna and her husband had spent a lot of time here working on our home during our first renovation many years ago.  They removed the old aluminum siding that covered the house, then they patched, and sanded the original wood siding and then they gave it a coat of fresh paint.  They installed new windows in the addition that was put on the house back in the 1960’s and trimmed them out to match the original ones.  We put a kitchen addition on at that time, and yes, they helped with all that too.

When Donna passed away, we wanted to honor her memory and celebrate all her contributions to our sweet little home.  One day when we were in the garden center, I spotted some fruit trees and suggested we plant one of those in her memory.  We picked out a nectarine, brought it home planted it and waited.  We waited for it to grow and produce fruit.

Each year, that tree looked sadder and sadder.  It just didn’t grow much and it didn’t look healthy.  It grew with a crook and leaned awkwardly – we didn’t have the heart to give up on it.  We had hopes for fruit each spring, but either the frost got blooms before they had a chance to develop or if they did develop, the deer got them right away.

Last spring, the frost didn’t kill the blooms and we were quite excited to see 3 little round fruits start to grow.  Two fell off, the third hung in there.  Each morning I would go out to inspect it and make sure the deer hadn’t gotten it the night before.  Finally, the day arrived when I thought it was ready for picking.  Mr. Cottage told me to go ahead and enjoy it.

It was, I guess because of all the anticipation the best nectarine ever.

It wasn’t a nectarine at all.

It was a peach.

I guess the tree got mislabeled.  I thought it was a funny looking nectarine, but hey that poor tree looks so weird anyway I just thought the fruit was following suit.

Donna’s tree has just started to bloom and of course, I’m holding my breath that frost doesn’t kill the blooms and that maybe this year will be the year for this tree to really show its stuff.

In other not so worldly news.

Yes, there was a post that disappeared.  That’s all I’m saying.

This house has been sick since the first of the year.  I am not exaggerating.  The two of us have been trading different levels of gross and annoying sicknesses.   Just when one of us starts to feel better WHAM, blindsided with another round of something that we then pass to the other.

I just want to sit on a sunny beach with my feet in the sand, with umbrella drink(s).

Speaking of drinks, seriously I’m obsessed with anything Ginger – but this Ginger Kombucha – this stuff.  That price though.  I’ve never made Kombucha, but now I have to.  So please, I’m asking everyone and anyone if you have a Kombucha recipe you’d be willing to share I’d appreciate it, especially if it is for ginger.  Thank you in advance. 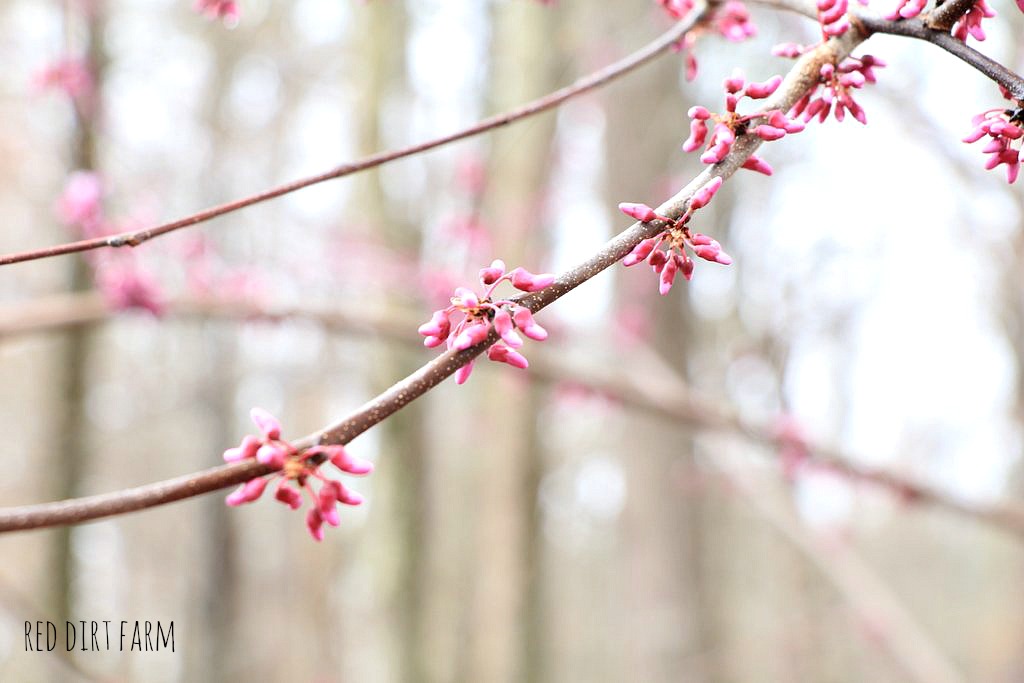 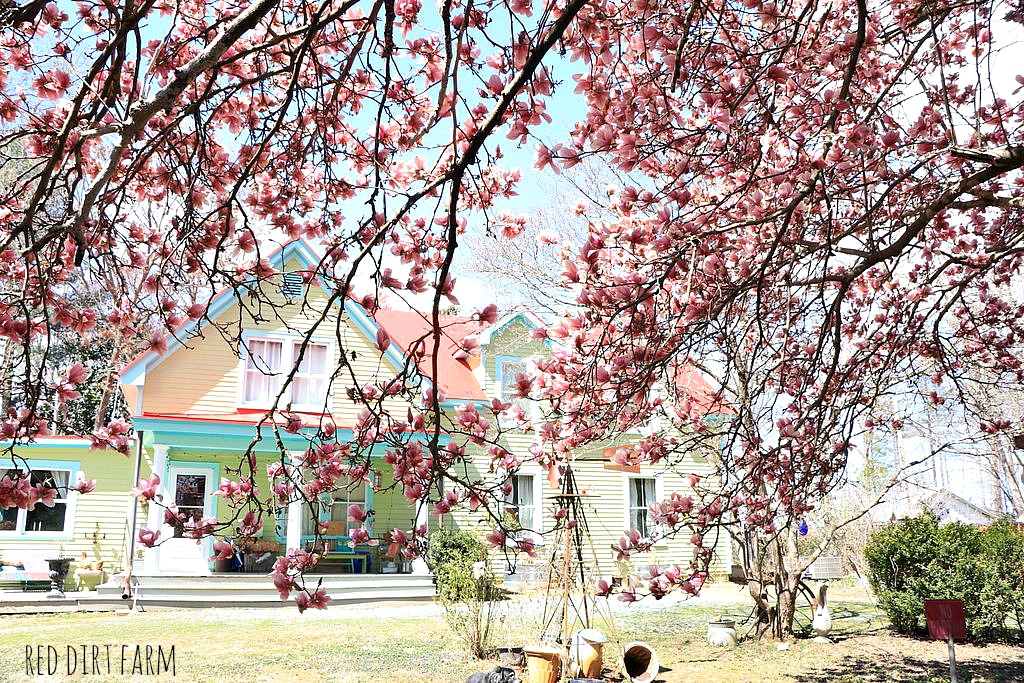 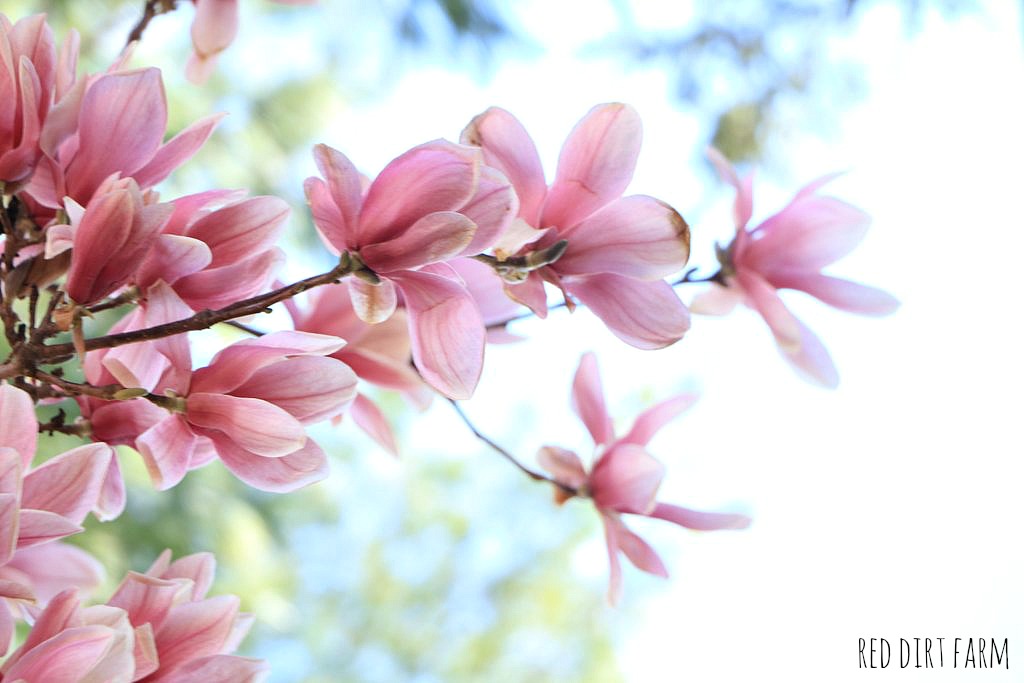 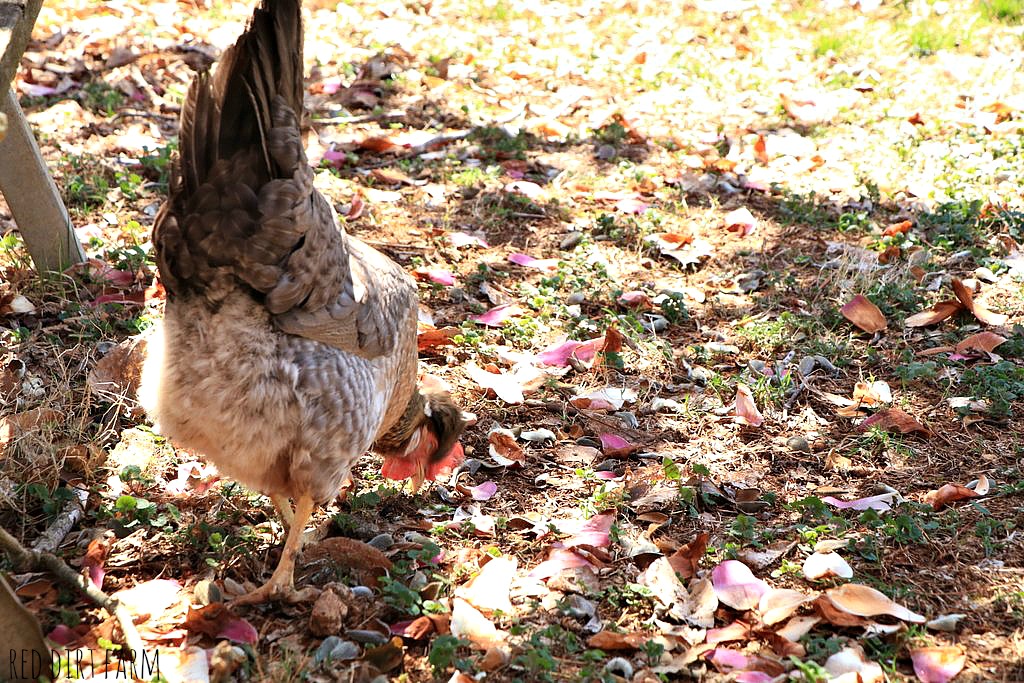 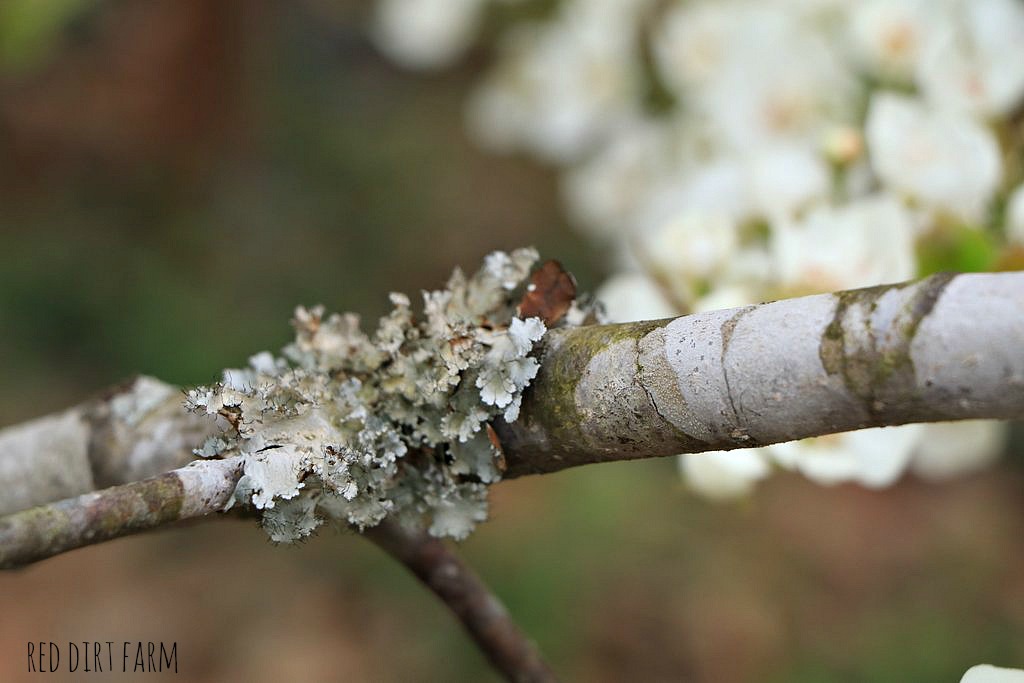 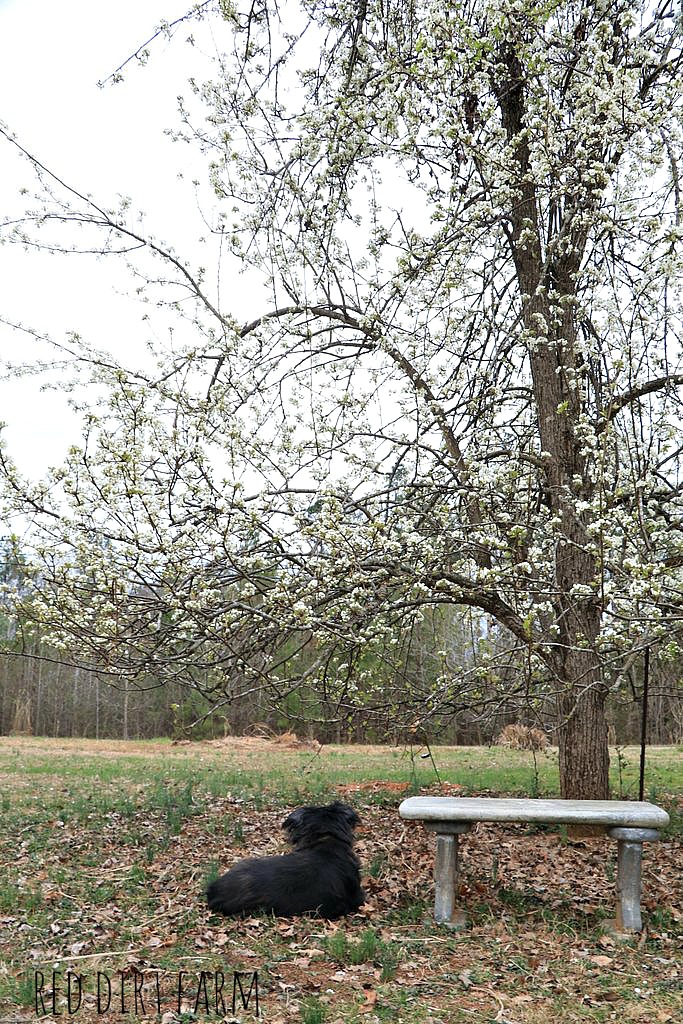 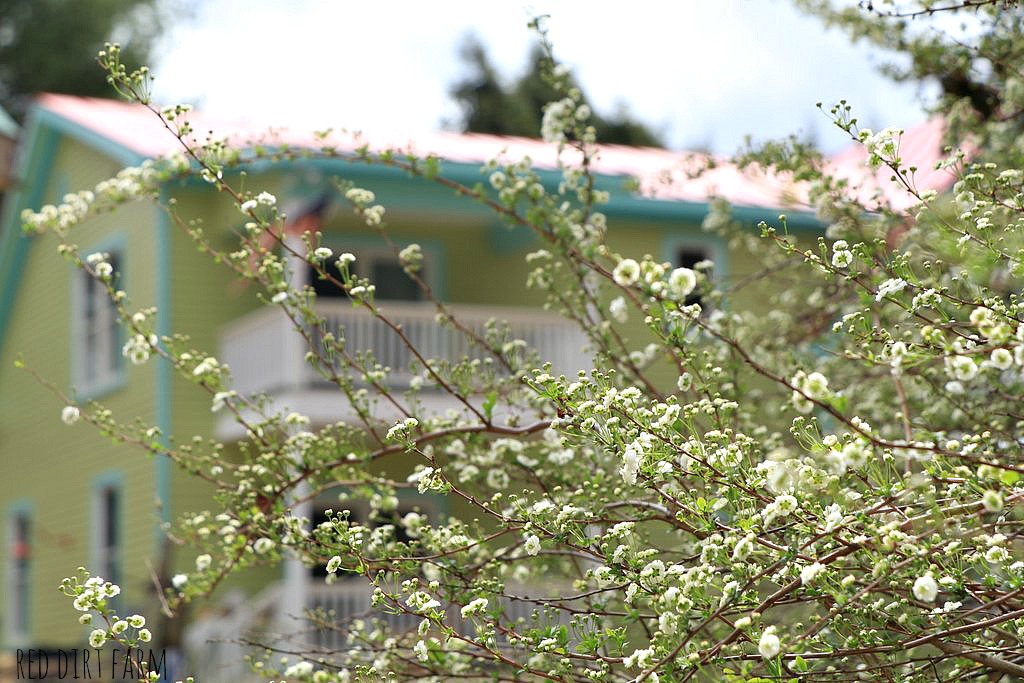 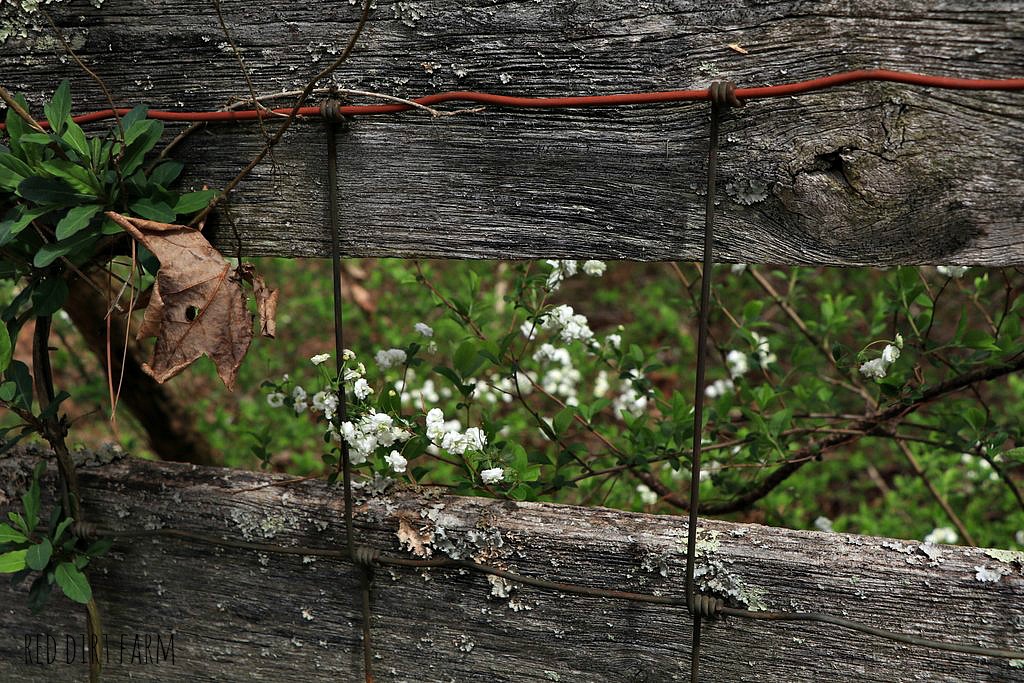 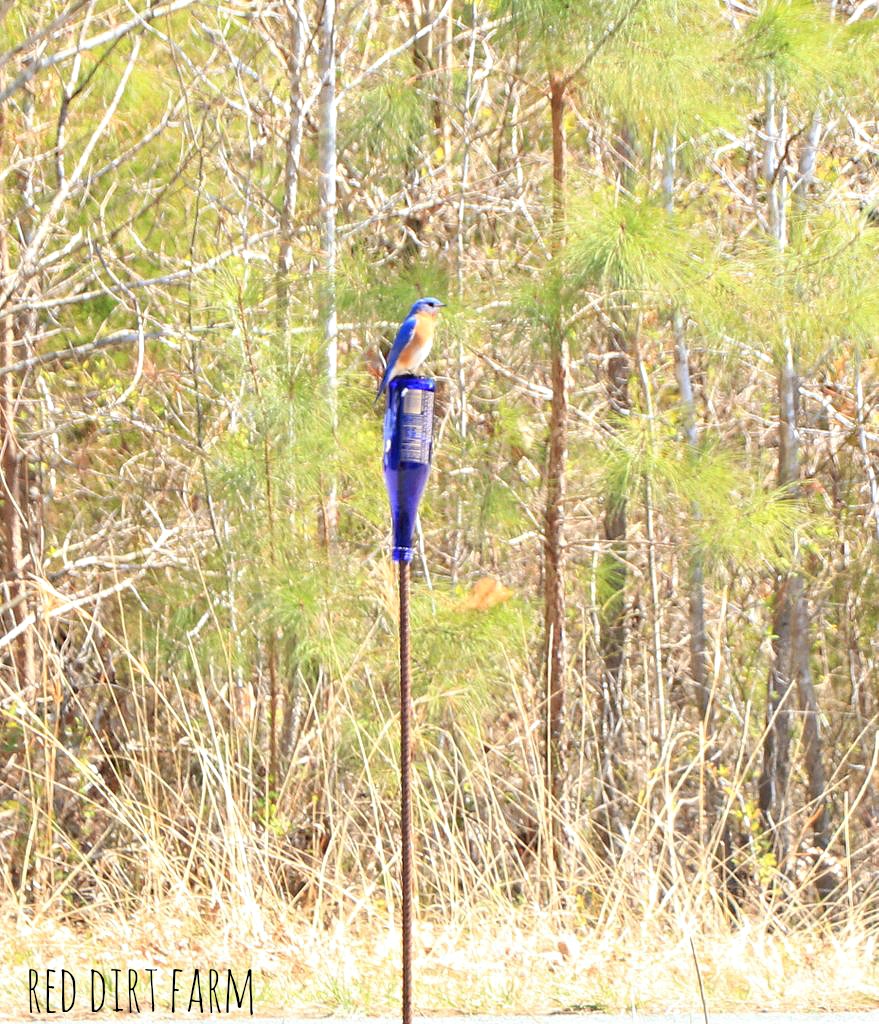 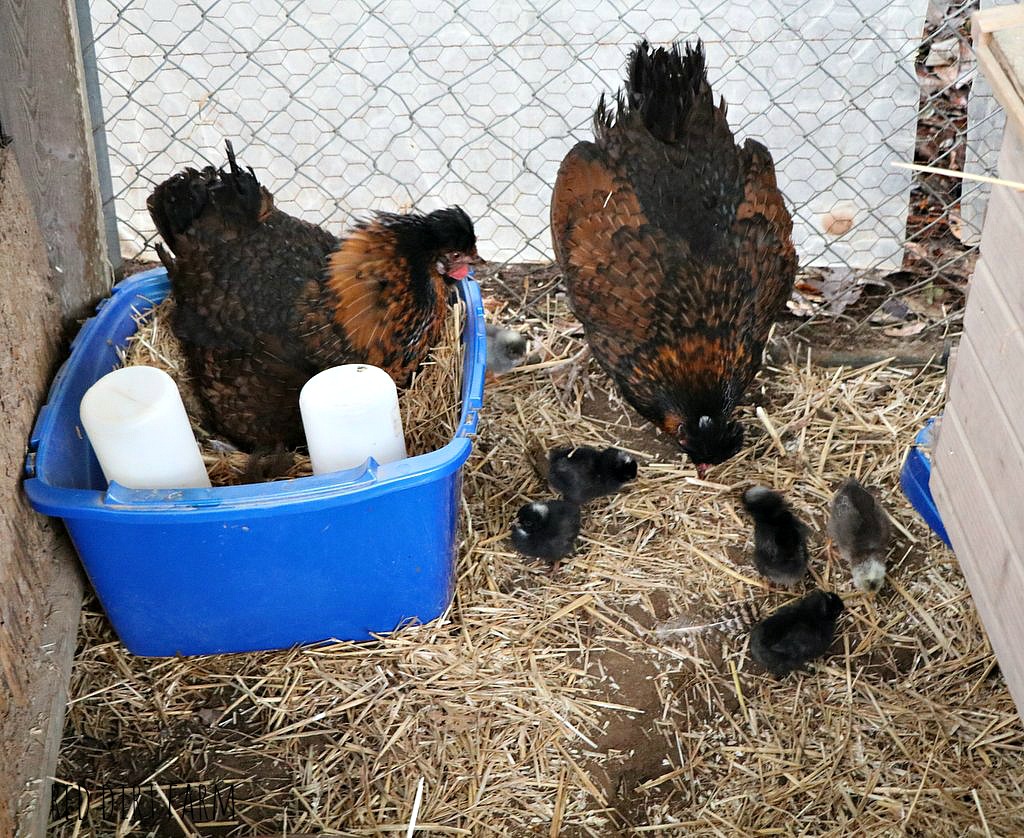 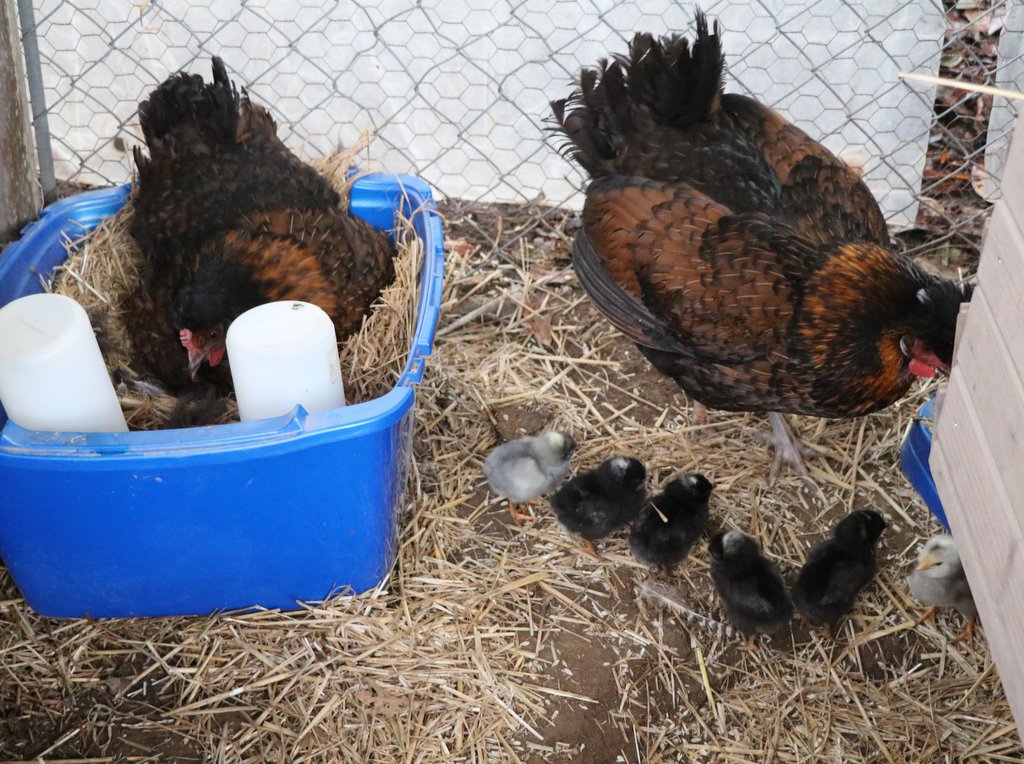 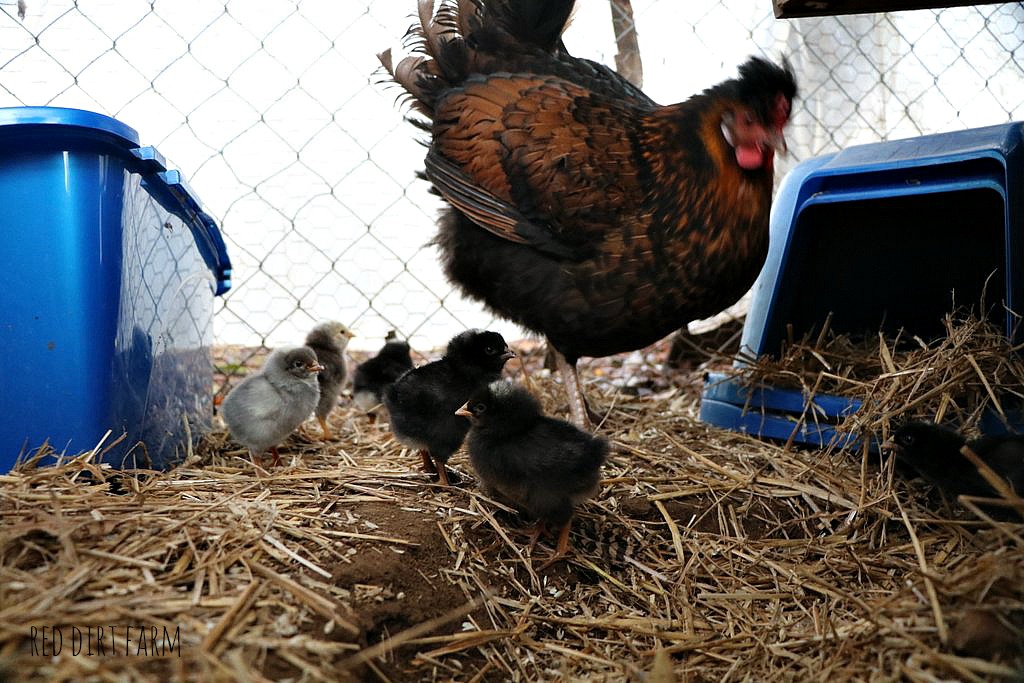 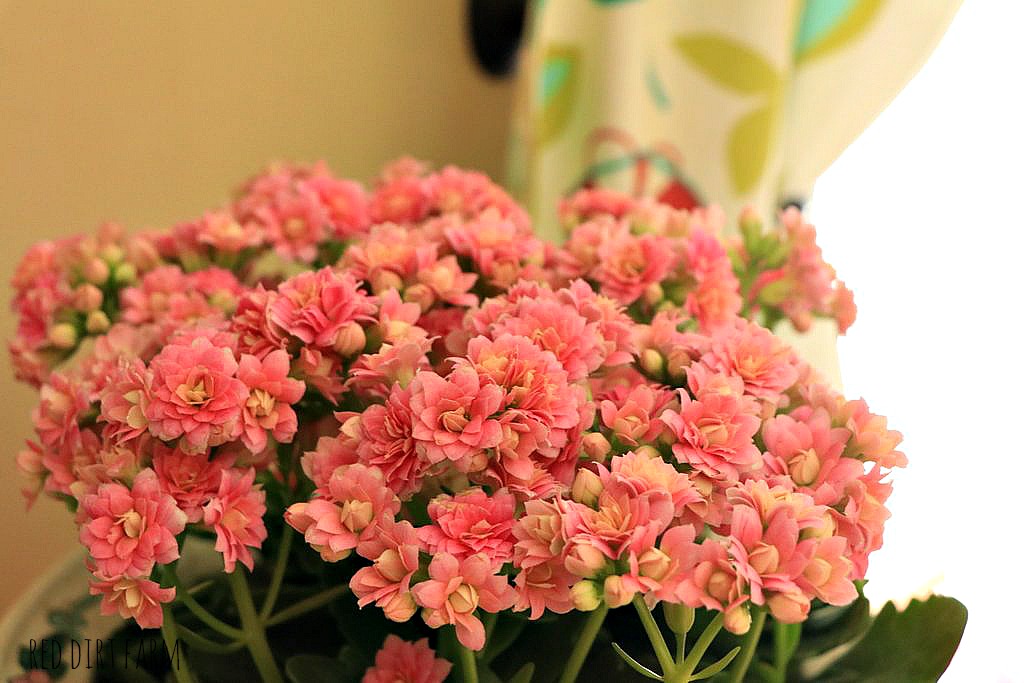 Spring with all its hope for new beginnings and new life is certainly upon us in a slow awakening, way.  Kinda like That Cat sleeping in the recliner, not wanting to get up and give you back your seat.

A predator of some sort, my guess is a fox, came yesterday and attacked one of the girls.  There is a shredded mess of feathers starting at the perennial garden, up through the pathway leading to the house, and then down the pathway leading to one of the coops.  It is a heartbreaking sight to see.  I found Lottie Moon in the coop covered in blood but it seems she will be ok. Fingers crossed. We will have to be more alert and vigilant.  There is always the cycle of life and death here on the farm.

We are celebrating life with sweet little chicks. Remember a few months ago I introduced y’all to our new rooster, Wyatt.  Several of the girls had gone broody.  For three weeks we waited patiently wondering if Wyatt would pass along his deformed legs to the chicks, or even if the eggs were fertile because quite frankly Wyatt is so awkward, it doesn’t appear that he is actually getting the deed done.  Apparently, he is getting the job done and his leg deformity has not been passed down.  Star hatched 6, happy and healthy chicks this week, and her sister Luna – 2 so far with 4 more eggs to go.  Meanwhile, Little Friend is sitting on 13 eggs, she should start hatching next weekend.  A few days after that Tweety Bird will be hatching 6 and then after that Cinnamon has 6 as well.  We will be rich in chicks.

As I have done for years, my kitchen table has been transformed into my potting table.  I have a couple of varieties of peppers and tomatoes started.  A couple of pots of cilantro, which garnished the best chicken wrap the other night.  Two pots of amaryllis and two flats of basil seeds I just put in the other day. Kalanchoe that I couldn’t resist came home yesterday, it has double petals, stole my heart.  Oh and one little bunny planter I’ve had since childhood, with delightful little muscari.  This table brings me so much joy.

Authenticity and transparency.  I’ve been hearing those words a lot lately.

A word about IG, I wanted an account for so long, but then I started hearing all this negative stuff about the fakeness of it all.  People getting so wrapped up in posting the best, prettiest, pictures.  I decided I wasn’t going to go there, after all, it felt too much like what I don’t like about Facebook and the reason I don’t use FB on a personal level.  Then for whatever reason, I revisited the idea, I have no idea what I thought I would get out of it.   So now that I have an account, I can see the fascination of it all. I enjoy meeting people from around the world, as I do with blogging.  I have an extremely short attention span, combined with poor eyesight which makes reading very difficult, so those short posts are perfect for me.

I also see all the picture-perfect images.  Then the feelings of inadequacies started forming in my mind. Really, I don’t take such good photos with my phone and it has left me feeling well let’s say –  less. I had to squashed those feelings.  Really all those perfectly staged photoshopped images – I don’t know how people have time to live like that. I do enjoy seeing them to a point. I do find inspiration that makes me want to take better images.

Anyway, it is the same thing I have felt for years about blogging, there are so many beautiful blogs out there with amazing photos.  I used to want my blog to be like that and I wished that I would have a million followers telling me how great my photography is.  I finally came to the conclusion that just isn’t who I am.  I don’t have the time or the desire to stage my home and my photos. I’m not saying I don’t try to keep the dirty laundry out of the pictures or make the pictures more appealing. Because I do. However, I’m just too lazy to do more than that.  I’m approaching IG the same way.  I love taking pictures and I want to learn how to take better shots, but not at the cost of fakeness.

I joined an online photography group many years ago, and I was told by a member that my images would never be taken seriously unless I photoshopped them.  Really?  Being the stubborn person I am, I said you just watch me.  It’s all so silly, I have to remind myself to let it go and just be happy doing what I enjoy.

There’s my transparent authenticity for today for what it is worth.